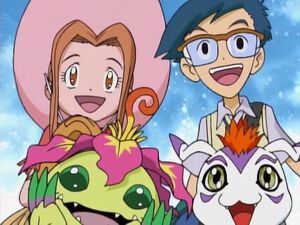 -Jou and Mimi often seem concerned about others.

- In Digimon: The Movie, little Jou is shown calling little Mimi, during the battle between Greymon and Parrotmon.

-When Mimi left the group during the Dark Masters saga Jou leaves with her.

- In the movie Our war game, on Mimi's entrance door, there was a heart-shaped box sent from Jou to Mimi, who was in Hawaii. (only in the dubbed)

-In Digimon Adventure episode Sora's Crest of Love, Mimi let Jou have her "love", giving him some seeds, to which the others laughed.

Retrieved from "https://fan-shipping.fandom.com/wiki/Jou_Kido_X_Mimi_Tachikawa?oldid=5872"
Community content is available under CC-BY-SA unless otherwise noted.