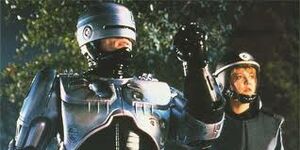 The relationship between Robocop and Lewis (from Robocop) is a long and complicated one. It didn't really develop until after his death.

If there was an example of a Co-Ed Relationship that would be in no way romantic, it would be Robo and Lewis.  When he was Alex Murphy, he playfully snarks with Anne upon first meeting, swiping the driving priviliages from her.  During a coffee break, he laments that he gets a kick out of a signiature gun twirling technique his kid's hero, TJ Lazer is known for doing.  Upon his gruesome death at the hands of Clarnence Boddicker and his gang, Lewis was devistated at losing his partner and new friend.  Upon seeing him again as Robocop, she didn't truely recognize him until he performed the trick he showed her prior.   Later when Robocop began regaining memories of his past life, Lewis took it upon herself to try to talk to him.  Unlike the others that tried to stop him before, he did take the time to stop so she could talk to him.  When she says "Murphy, it's you." it became the first of many clues that Robo used to regain his memories.  When the Swat Team assaulted Robocop under the impression he was commiting a crime, Lewis got him out of the line of fire and hid him in the steel mill and even got him the supplies he needed, including a drill so he could take his mask off revealing Murphy's face underneath, warning her beforehand that she may not like what she's about to see.  Lewis also informs him of his wife and kid's whearabouts and later helps him reconfigure his damaged targeting system.  After Clarence wounds her in the final gunfight, Robo advances on him, with the intention to kill him for what he did to him and what he just did to Lewis.  Lewis responded in kind, by killing Leon Nash after he dropped heavy scrap on Robocop.  In the second movie their relationship is taken further as she backs him up during the Nuke raid and backs down on his order during a hostage situation.  After Robocop was damaged by Cain and reprogrammed by Dr. Faxx with many unnecessary directives, Lewis is the only one that sees that Robocop is not well especially after seeing him reading Miranda Rights to a corpse.  When Robo electrocutes himself to rid the directives, Lewis hits him away from the fuse box to keep him from killing himself.  When Cain is ressurected as Robocop 2, Lewis backs Robo up by hitting Cain with an APC and using the Nuke drug to distract him while Robo destroys Cain's brain.  Their relationship draws to an end in the third movie. After saving her from the Splatter Punks, Robocop helplessly watches his partner die at the hands of McDagget.  However he was able to keep his promise to her and avenge her death by destroying him along with the OCP building.

Retrieved from "https://fan-shipping.fandom.com/wiki/Robocop_X_Anne_Lewis?oldid=4684"
Community content is available under CC-BY-SA unless otherwise noted.