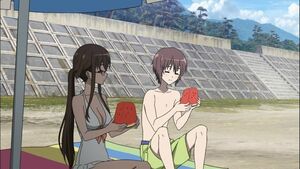 Yuuya Mochizuki's and Reiko Mikami's relatioship is a strange one, since the latter keeps her work and private life seperate.   As Miss Mikami she is simply Mochizuki's teacher, but as Reiko, she's his classmate's aunt.

As Reiko, not much is known outside of Episode 8 what her relationship with Mochizuki is on a platonic level.  However the stuff that is shown implies that she is friendly enough to let him sit up front with her.  Since he never knew this side of her prior to episode 8, he was visibly shocked at her crazy driving and roadside demeanor on their way to the beach.

As Miss Mikami on the other hand, their relationship is strickly student and teacher.  She does however notice his exceptional work due to his obsession with Munch's The Scream painting, but insists that he keep that in the art club rather than art class.

It seems that throughout the entire anime, Mochizuki has a crush on Miss Mikami and often asked Kouichi if he also found her attractive. (Not knowing at the time that she is his aunt.)  He's also the first to point out that she was sick. (Due to a massive hangover on Reiko's part.)  Around episode 8 he does know enough about Reiko and Mikami being the same person as he sat in the front seat with her during the drive to the beach.  He also volunteers to look for her during the fire/killing spree to make sure nothing bad happens to her.  The romance however seems to be one sided as she doesn't show those kinds of feelings in return.

When she is outed as the extra and killed, he has no memory of his crush on her or any events happening with her involved.

Retrieved from "https://fan-shipping.fandom.com/wiki/Yuuya_Mochizuki_X_Reiko_Mikami?oldid=5442"
Community content is available under CC-BY-SA unless otherwise noted.